Last weekend I played the pre-release for Return to Ravnica. It went very well. I decide to use Rakdos for my guild, The logic being that to my knowledge not many people play Rakdos. As it turns out almost everyone used Izzet or Golgari, Why I don't know but more on that later. I was 2-1 on my first game and 1-2 on my second and third, I almost won the second one but a stroke of luck on my opponents part just barely let them beat me. I could have stayed for a forth match but it was getting late and I did not have any shot at first prize. All things considered I did well keeping in mind the fact that I did not get many good cards. I for one am looking forward to drafting the new set and am eagerly awaiting the release of Gatecrash.

Sidenote: I think people like Izzet and Golgari so much has to do with the duel decks of them that were released a bit before the set came out. Don't get we wrong though, They are good guilds, People just overvalue them.
Posted by Leo Steel at 2:52 PM No comments:

Email ThisBlogThis!Share to TwitterShare to FacebookShare to Pinterest
Labels: Magic

I only just relised how bad I am at art. I always knew I was a bit lacking in talent when it comes to drawing but seeing some of my sisters sketches [which are very good, With her permission I may share one or two of them] finally put it into perspective. In hindsight it's funny how I can't do a good stickman.

http://openmedia.ca/blog/tpp-secretive-agreement-could-criminalize-your-internet-use
And : http://stopthetrap.net/
Draw your own conclusions, Draw your line in the sand.
Posted by Leo Steel at 12:15 PM No comments:

The storm is over, And here is what happened: We lost power very early in the day and were without power for most of the day, My sister did not take this well. All in all though we were lucky, Our house in undamaged and we have our power back [As of posting this there are still at least 1500 people without power] so I think things went pretty well, Though from what I understand the rest of the island is in pretty rough shape.
Posted by Leo Steel at 12:04 PM No comments:

[I lost power two seconds before I hit publish for this post, But here it is anyway.]
It hit us, We may be without power in a bit so I will keep this short. As I wright this it is 8:02 AM, The weather outside is scary as hell, There i little rain as of let but the wind is blowing at such a force at times I feel worried that it may cause serouis damage. On the bright side school has been closed.
Posted by Leo Steel at 11:58 AM No comments:

There is a storm coming to the fog shrouded rock we call Newfoundland, We get a storm about once a month but this is different, This one is a hurricane. If it hits us I will do my best to get some cool footage of the storm to post here, But there is a chance that I may be without power tomorrow so if I don't post anything for a while that's why.
This will be the second hurricane I will have been through here, Hopefully things will go a bit better this time.
Bye for now.
Posted by Leo Steel at 4:35 PM No comments:

Not much has been happening lately other than me getting sick, So don't expect much from me. I hope that another screenshot from the Minecraft world i'm working on will keep you all happy. 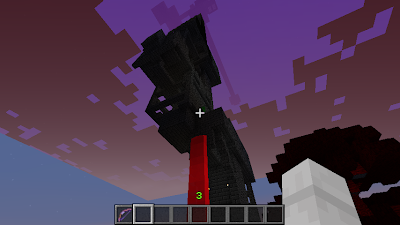 For those of you who share my love of Magic I also bought FTV: Realms, And it is awesome!
Posted by Leo Steel at 10:01 AM No comments: